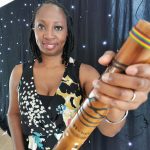 I’m a Professional Storyteller and Writer, based in London.  I tell folktales, myths and traditional tales to children and adults.  My style of storytelling is very participatory where I encourage all ages (from babies upwards) to get involved with bringing the stories to life.  Sharing stories and folklore is a wonderful social activity where those listening can imagine each image created by the teller who breathes life into word.  I’m an active member of the Society for Storytelling, supporting and promoting the ancient oral tradition of storytelling.

I’m incredibly excited to announce that I have two new books which will be published in 2021! I am writing a book about Caribbean Folktales which will be published by The History Press. It is a collection of stories from the Caribbean island countries and first-hand reminiscences of migration to the UK from these islands during the Windrush years.  They are reflections on how they felt at leaving their home, country, and friends.  I’ve also captured their aspirations for the new home to be – England; the ‘Mother Country’. I’m writing these wonderful memories in the first person to capture their voices alongside the Caribbean characters, traditions, and landscape in the folktales I have retold and adapted.

I am also writing a book about African and Caribbean, Folktales, Myths, and Legends for children.  This will be published by Scholastic.  Find out how I chose the stories for this collection. Keep up with all my progress in my blog.

The stories I tell

I have a large repertoire of tales including stories that span the curriculum, cover themes or a particular period in time to suit your event.  Here are some examples of the stories I tell. My specialist areas are:

is in researching, writing and producing programmes for Nickelodeon USA on Nick News and BBC Education with GCSE Bitesize; before spending several years at CBBC  as a BBC Children’s interactive and live television Producer working on shows including  BAFTA award winning children’s programme SMILE, Dick & Dom in da Bungalow and Blue Peter.

Where I tell stories

Here’s a partial list of who books me for storytelling:

in South East London, telling tales, writing stories and performing on stage from an early age.  My parents are from Guyana and my Grandmother frequently shared with me Guyanese folklore.  Amoung others, this included a mixture of African, Dutch, Chinese, Amerindian and Portuguese stories that had been brought to Guyana, the ‘City of Gold’.  Tales of ‘Anansi‘, ‘Ole Higue’ and ‘Baccoo’ were brought to life for me with her vivid descriptions and warnings before bedtime “be good child otherwise the jumbee gon ketch you”.