Last weekend I’d been invited as a special guest to perform storytelling at the Chicken Shed Theatre for their Tales Big Day Out. It’s a really fun day of storytelling workshops and interactive performances with a brilliant kids theatre group.  This is exactly what Story Boat is all about. 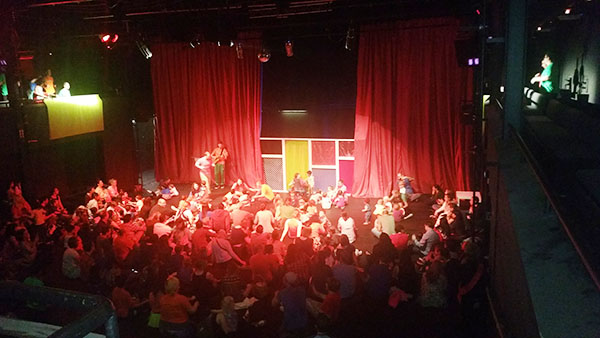 Working with the ‘Tales from the Shed’ team reminded me of working with my friends at BBC Children’s (CBBC).  Everyone was full of energy, enthusiasm and beaming like 100 watt bulbs.  Parents sat back and relaxed or joined in as their children were entertained in a relaxed festival-like atmosphere.  They could choose which performance they wanted to attend and then get shown by volunteers to the relevant studio.

I was planning to do Caribbean storytelling with a version of ‘how Anansi the Spider claimed the stories’.  Each time I tell this story it’s slightly different and this time I was able to really expand the story because my audience was ranging from 0-6 years old! I really love being able to improvise with a story and be spontaneous with ideas depending on the audience.  I had several sessions and so changed aspects of the story according to the age group.

It’s the tale about how Anansi comes to get hold of all of the stories that are told about him.  There’s a well known Ghanian version of the story from where it originates which has Anansi being set three challenges from Nyame the Sky God of the Ashanti people.

In the Caribbean version, he’s set a challenge from Tiger who is King of the forest to capture ‘Snake’ alive if he wants to claim all of the ‘stories’ for himself.  After failed attempts to capture Snake, Anansi tricks him into thinking he needs to prove that he’s the longest animal in the forest by stretching out his body against the length of the tallest tree.

I’ve told this Caribbean folk tale many times and I think everyone enjoys the bit where I get a few children to pretend to be forest animals and help me hold up a bamboo stick.  The stick represents a large branch from the bamboo tree that the character ‘Snake’ uses to measure himself against.

Children clambered up to hold the bamboo stick with me.  So as not to leave the rest of the audience out, I got them to shout out ‘STRETCH SNAKE STRETCH’ before I started performing the action of stretching like a long snake against the bamboo stick. It was loud and lots of fun.  Thankfully the Chicken Shed Theatre team were on hand to help children with actions. 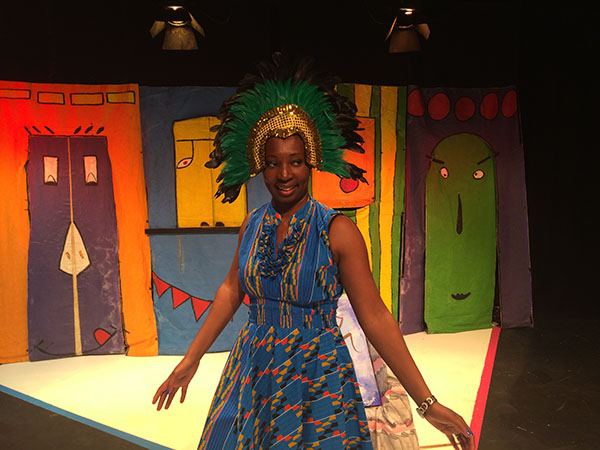 It was a really diverse audience with folks from lots of other countries including Ghana and India.  One mum asked me afterwards if I was actually from Ghana because I’d explained at the start where this story originates from.  I was born in London but my parents are from Guyana.

I let them know that it was my mother who first introduced me to Caribbean stories of Anansi the spider.  She would read from Louise Bennett’s book ‘Anancy and miss Lou’.  Louise Bennett is the leading folklore artist of Jamaica.

Her book is written in Jamaican dialect which used to send me rolling around in fits of laughter when my mum did all the voices of the characters in her Guyanese accent.  She was always careful to remind me that although it’s funny, Miss Lou had written Jamaican dialect at a time when it was not considered art form or generally acceptable.

When telling my Caribbean version, I don’t do full dialect but I’ll always keep in an original rhyme or chant which the audience is welcome to join in with.  For this story, there’s also a chance to get children thinking about which animals they might find with Anansi and what time of food eg fruit would be in the Caribbean.